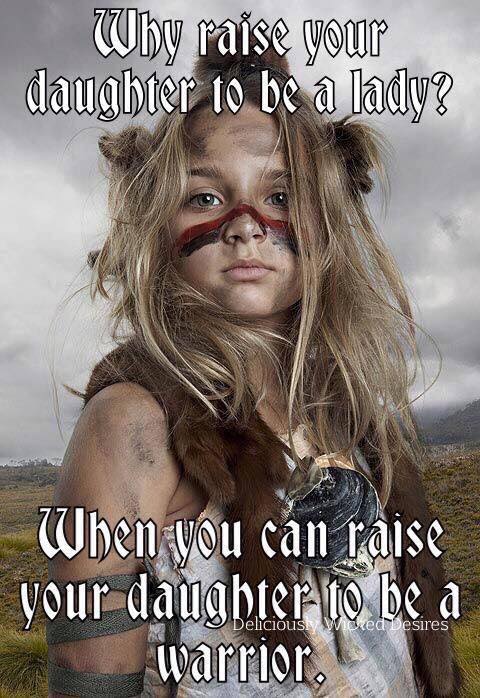 Now I am sure my friend just thought, “That’s right, you go guuuurl!” and re-posted it without much thought.  She likely didn’t mean any harm.

But let’s talk a closer look, and think more critically about the message in the image. (I was relieved to see the comments attached to the image did point much of this out, yay red pill commenters!)

First of all, the image has a “Mad Max” type feel. This is not an image of a little girl living in a safe and stable civilization. So that right there is not a good thing, as girls in such a situation would most likely be subjected to abuse, rape, kidnapping, and other horrible treatment in such a doomsday scenario.

Secondly, women are designed to bring life into the world, and to nurture and sustain life, not to take life. If this little girl were to die in battle, her tribe loses far more than if she was able to reach adulthood and help her tribe gain in number and strength.

There’s a red pill saying that, “sperm is cheap, eggs are expensive.”  What that means is that men are more “expendable” from a biological standpoint. One male can impregnate many women, carrying on his genetic lineage, while a female can only bear one child at a time, and at great personal risk and cost, especially in a scenario like the above where there likely would be no medical help!

Now, expendable is not the same as unnecessary or unimportant or optional. Men are certainly a key part of a functioning, safe society. Their natural role as provider and protector is a noble one. (As is the female role, as the giver of life.)

This is true in many cases in the animal world as well. For example, I keep chickens. In a flock, the rooster is the only one who looks around and up for danger. The hens are completely oblivious, relying on him to sound the alarm if trouble approaches. When it does, the rooster will literally throw himself in the path of danger to allow the hens to escape safely back to the coop. I have had several roosters give their life in this way, trying to fight off a coyote or wayward dog. Interestingly, the hens (whose eggs are fertilized weeks before they are laid) will then immediately start a nest, I assume to replace the missing rooster they have just lost. It’s also important to note, without a rooster, the coyote or dog will kill the entire flock of hens, who do not even see it coming.

And finally, encouraging women to be fighters instead of lovers does not prepare them well for the role of wife or mother. Brash argumentative uppity women are unpleasant to be around, and struggle to maintain relationships. Not good for her, her mate, or her children! (Also note, being a lady has the exact opposite effect!)

Not that women can’t fight if needed, but it is usually not the go to. Even the strongest women have trouble holding their own against an average man. If it is down to women doing the fighting, things are very bad indeed!

In any case, while such images today are meant to “empower” women to be strong and self sufficient, under examination such thinking really isn’t in the best interest of anyone, including the little girls being told to “be a warrior!”

What do you think? Please share in the comments!

94 thoughts on “Ladies or Warriors?”