In the last post, the topic of respect came up in the comments, revealing some differences between how men and women view respect, and it was interesting for me to ponder both sides of the coin. And in many ways they are somewhat two sides of the same coin.

The men explained that respect between men is not automatic, it must be earned.   Something like this: 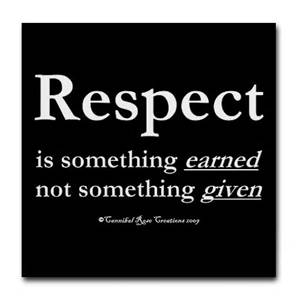 Women tend to view respect as a basic starting point of interaction, more like this: 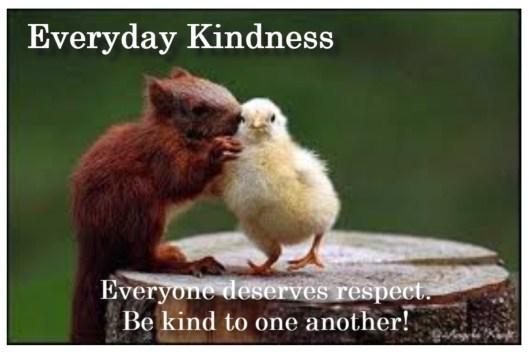 In my eyes, neither viewpoint is “wrong” so much as they are a reflection of how differently the male and female minds work.

Men and especially groups of men seem to automatically think in hierarchies. In a room full of men, it is immediately clear to all of them (without anyone even saying so) where they  all “rank” so to speak in the order of males in the room. Seemingly subconsciously, the Alpha Male of the Group (AMOG) emerges, and the rest fall in line accordingly. There may be some posturing to establish this, but it ends relatively quickly (or if not, it’s likely they will spar verbally, physically, or both.) There is no debate. There is no discussion. There is no consensus. There is no vote. It’s not even necessarily seen as negative or a slam on the individual man based on where he ranks. Each man simply understands and *automatically accepts* his place in the order. Men who do not are usually ostracized from the group and considered dangerous or a threat to safety and order of the whole. Men who do not understand this hierarchy concept are generally not respected by other men.

Women, and especially groups of women, do not think like that at all. Women are all about consensus, inclusion, and making sure everyone feels OK and heard. Respect seems to be more about acceptance than rank in the female mind. Women will go to all sorts of lengths to dance around the idea of rank or hierarchy. Women like flat hierarchy and equality. Women often rebel against the idea of a vertical hierarchy, and tend to see it as “unfair.” (This is likely the line of thinking that lead to feminism, interestingly.)

I find it interesting to ponder how these two differing views of respect (both valid) may lead to all sorts of misunderstandings between men and women.

What do you think? How do you define respect? Please share your thoughts, experiences, examples, etc. in the comments.

Ladies, this weekend was a good reminder for me that I cannot lose sight of the fact that they don’t speak Vesuvian on Mars.

Or in other words, men and women are different. We just are. We think different. We experience the world different. We want and are motivated by different subconscious and/or biological agendas and desires. And we have been since the beginning of man meets woman.

I can hear it now, “But these are modern times, things have changed.”

I would argue they haven’t. You may be reading this on the Internet from halfway around the world, on your phone, while eating a meal you didn’t kill, raise, forage prepare, or even cook while I sit here and have my morning coffee made from beans grown in a country I have never visited that were picked and processed and transported and roasted and ground by people I have never met using a process I don’t understand any better than putting the little plastic cup into the machine, adding water, and pressing a flashing blue button — but the reality remains that we’re not really that different than homo sapiens who lived in mud huts and barely understood fire.

Ok, maybe you can explain the chemical in’s and out’s of fire (or not), but if I am honest, the only thing I know about fire is that I flick a cigarette lighter or strike a match and it happens. Without that, I’d be in bad shape.

But back to my point. From the dawn of time, or however you believe man and woman came to be, men performed certain functions of survival that required a particular skill set and women performed an entirely different set of survival functions that required another skill set. They needed each others skills, but there was little overlap between what skills and knowledge he needed and she needed to do their set of survival tasks. They were specialists and their brain functioning reflected that.

We could get distracted by the nurture or nature thing here, or one off scenarios where maybe occasionally a man or woman was outside the box and that worked out, but let’s just simplify it to say that either way, overall and most of the time, men and women who survived did so because their brains worked in the way they needed them to in order to do it. And it hasn’t changed and (like it or not) it probably won’t ever change.

Women lived in a world that required being able to do something with the resources provided and read the tea leaves of nuance: or in other words they lived in a village filled with women and children and old people. Survival meant navigating the complexities of that world, reading between the lines, making deals and alliances, and concealing any ulterior motives that might rock the boat because without that village odds of survival were slim to none. It was a world requiring a vocabulary and understanding of syntax and meaning and what was being said without it being said or in addition to what was said that would stump a trained linguist.

Fast forward to men and women today. Man talks to woman. He says a short and simple statement that means exactly what he said. Woman translates that simple and literal sentence to mean what it would mean if she was saying it, including all of the hidden subtext, then responds. Perhaps she responds with a soliloquy or a sentence, but guaranteed whatever she said, she has said, but not said, about 15 other things as well.

He is trying to process how things went from what he said to what she said. He either repeats what he said, or tries to respond to some or all of the gazillion plus one things she said (but misses the 15 she didn’t say).

Then add to it, not only are they talking out loud, they are also talking internally.

From what men have told me anyway, inside his head the dialog is again pretty straightforward and literal. There’s no “unsaid” or “secret”  or “hidden” message.

Inside her head, the dialog is more like a complicated decision tree, complete with multiple rabbit trails, twists, turns, and numerous contingency outcomes. Oh and about 15 more things she is not saying but expects him to understand because, duh.

And whether it was 1500 years ago or this past weekend, it all boils down to this: they don’t speak Vesuvian on Mars. But somehow in the heat of the moment, it is all too darn easy to forget that.

Either right then, or after everyone settles down, they hopefully kiss and hold each other and don’t say anything (except maybe “I’m sorry”) and then somehow magically everything is OK again.

“Nobody will ever win the battle of the sexes. There is too much fraternizing with the enemy.”
― Henry Kissinger