Well, who would have guessed a pandemic would get me writing again, but here I am! Glad to see you!

I am on day 15 of strict social distancing, and day 8 of complete just me and the girls lockdown. We don’t plan to go anywhere or see anyone in person for at least another month. If all the models are correct, my area should hit peak cases in about two weeks.

Luckily I am for whatever reason an early adopter, so I noted months ago that this was likely going to happen. I stocked up on food and supplies, figuring we’d be an a lockdown like I was seeing in China at the time, and I did not want to be caught unprepared. We’re stocked to the gills!

A bridge I have not crossed yet but will need to is to ask to skip visitation for one weekend. I think as the cases will be peaking then, and the other side is out in the wild and in rather high risk exposure roles at that, I hope that the reasoning will be obvious. Just one weekend. To be made up later, fair and square. (I would not play games with this.)

So after four or five zero outside contact days of not knowing what to do with myself and obsessively following news articles and researching about the virus, I found myself yesterday wanting to nest.

I have been cooking up a storm as the kids seem happiest when there is food in the works. I suppose on a most basic level, food equals we are still OK. I had for days been gently quieting the agitated folks on my regular social media, trying to be a voice of calm and reason when the rest of the crowd felt one step short of full blown Mad Max. I keep it light, breezy, slip in some red-pillish thoughts served with lots of plausible deniability.

I can only imagine what it must be like to be getting red pilled in a single week. It was hard enough for me over a span of several years. And yet here they are, the blue pill herd, not knowing what to do as the narratives they have clung to are coming crashing down around their ears. It is admittedly a bit much.

So I have been trying to be a helpful guide, saying things like, “It’s not crazy, it’s OK to change your point of view based on life experiences,” when they say they no longer support open boarders or overseas manufacturing or they can’t relate to their usual party holding up their relief check over ridiculous pork projects that can in no way be explained as making sense to be included. I virtually pat their hand.

Who would have though a virus could do so much to expose what we folks in the Red Pill world have been discussing for five plus years.

Yesterday, as I was nesting, I posted a few snapshots of domesticity, joking I was somehow turning into a 50s housewife in less than a week. I expected to get heckled and jazzed.

Instead, within minutes career gals were jumping in and confessing they were also baking bread and nesting and (gasp!) actually enjoying not going to work. I pondered how many of them will decide not to go back to their non-essential jobs.

Now of course that doesn’t solve the other problem Larry G pointed out when I shared this on another blog in the comments. He felt it might be good to let them know that all the good guys are long gone, and part of being a housewife included, well being a wife. And that maybe I should tell these 30+ SIW that the gentlemen have long since left the building. Good luck!

I figured Rome was not built in a day and told him I will share that when they get to the wailing about, “Where are all the good men,” part. For now, maybe best to just let this sink in.

I have long asserted that the SIW narrative is the blue pill flip of the soy boy. Maybe a few weeks in isolation with nothing to do but bake and explore their hobbies might put them in touch better than anything that they had been sold down the slave wage, dead end job river by those telling them staying home would only lead to sadness, abuse, and oppression.

I suppose for now they have the government to play the role of their provider and protector, but finding one of their very own in real life once this blows over may prove more difficult.

Anyway, I laughed when later that day I saw the president serve Ms. Markle a red pill straight up, unrepentant Alpha style. Let’s have a look, shall we? 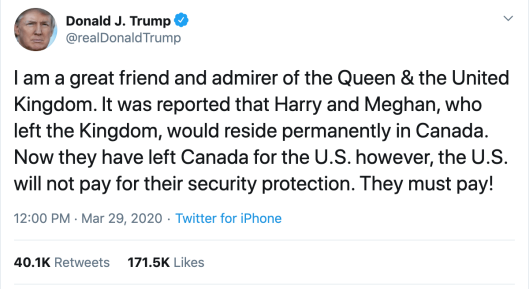 Ouch! Yep, making your own choices is all fun and games until you’re held accountable to them and reality hits. Then a gal realizes she’s played her hand out capitalizing on her sexuality and youth, getting her every whim, thinking it would never end — until just like that it does and and still has decades and decades to go minus a title, crown, or royal privileges. Markle isn’t on her own yet, but if I were a betting gal I give it two years, tops! (Should have looked a little closer at the fates of Fergie and Wallis — not the lap of luxury life either had imagined ahead, I am guessing.)

Anyway, interesting times! What do you think? Please share in the comments!